I lost my friend Munfard 75 years ago

WWII Veteran visited the grave of his friend for the first time exactly 74 years after his death. 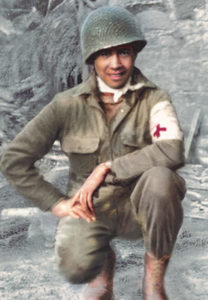 Munfard Kelley, a 28-year old married man from the cotton fields in northern Alabama was known as « Pop » in his company. He was married to a young woman named Edna Duvall when he enlisted at Fort McPherson in Georgia on 6 April 1944, two months before D Day.

« Pop » was later assigned to Fox Company, 16th Infantry Regiment of the 1st Infantry Division which had suffered enormous losses during the invasion of Normandy. On November 19, 1944, Munfard Kelley was killed in action in the vicinity of Hamich, Germany. His fellow comrade Charles N.Shay, medic in F Co, tried to assist him to save his life.

“I have the picture of what happened in my mind as if it happened yesterday. I do not want to sound dramatic but it is so. I remember hearing him call for me. He always used to call me “Doc” and I heard the call “Doc, Doc”. I knew it was him because I recognized his voice.

I was in the CP where I always stayed until needed. I went to his miserable fox-hole. When I saw him, being acquainted with death, I knew there was no help for him and I could not get him out of his four foot deep fox-hole alone but I also knew it was useless.

In the Hürtgen Forest, we were under a continuous barrage of artillery shelling. A shell had hit a tree top directly above his fox-hole and rained schrapnel down upon him. He could not survive such wounds. I returned to the CP and had an emotional breakdown.

I could not stop crying because I had lost a dear friend. I was retired to the rear-echelon for approximately one week and then returned to normal duty. When I think of the Hürtgen Forest, I always think of my dear friend Pop ». 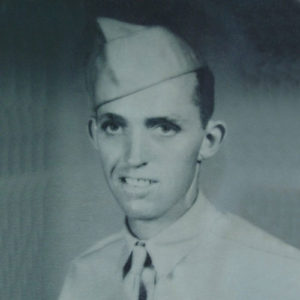 On November 19, 2018, Charles N.Shay visited for the first time his old buddy that lost his life exactly 74 years before. He told him that he was not forgotten.